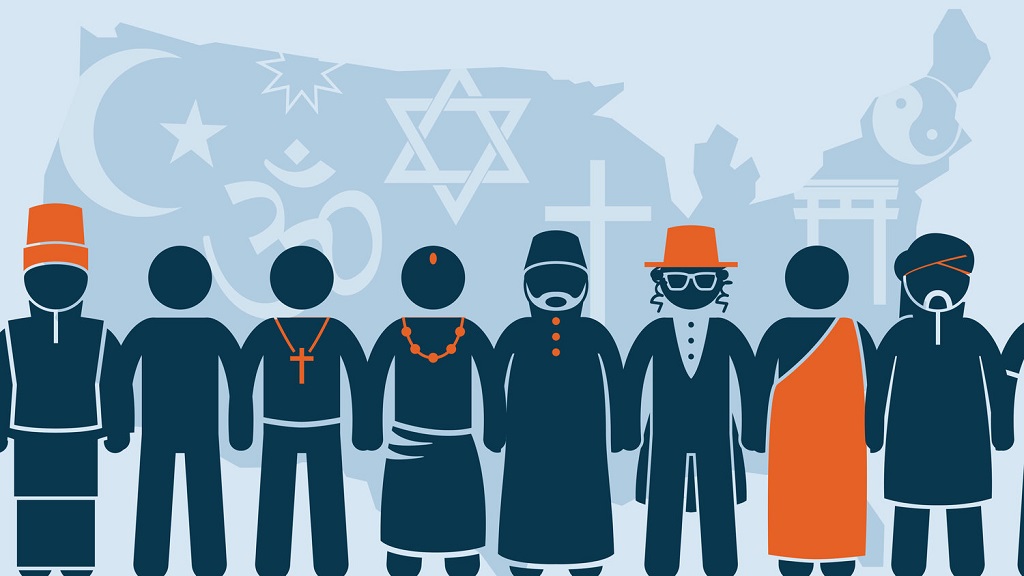 Religion plays a very important role in the lives of millions of people, whatever they profess. It is estimated that there are more than 4,000 religions throughout the world, and approximately 59% of the world’s population declares themselves religious. Today we would like to review the world’s largest religions, taking into account the approximate number of faithful who follow them. Besides many religions, there are two main subgroups: the Indian religions (Buddhism, Hinduism, Jainism, etc.) and the Abrahamic religions (Christianity, Islam, Judaism, etc.). Also, some Chinese religions are spreading in the world.

These are the most widely practiced religions in the world.

It began more than 2,000 years ago and currently has more than 2,200 million faithful throughout the world. Their faith is based on Jesus Christ’s life and teachings, whom they believe God sent us His son to save humanity from hell. His faithful believe that his sacrifice on the cross, death, and resurrection happened to give him eternal life and grant forgiveness to those who accept Jesus Christ as their savior.

It has more than 1,600 million faithful and is a religion that began in Mecca in the 7th century. His followers believe that Allah is the only God and that his words were written in the Quran the holy book. The Prophet Muhammad is one of the most important figures in the Muslim tradition, and the faithful of Islam believe that he was the supreme Prophet of God.

It has more than 1,050 million faithful, the majority residing in South Asian countries such as India, Indonesia, or Nepal. Many of its practices have also become very popular in the West in recent years, such as yoga.

It is another of the world’s largest religions, which was founded about 2,500 years ago in India and currently has more than 480 million faithful throughout the world. It is based on the Buddha’s teachings and its beliefs include non-violence, moral purity, and ethical behavior. Meditation and karma are fundamental in the daily life of Buddhists.

This religion currently has 104 million followers and it is said that its beginnings were in the 8th century. It is based in Japan and its faithful belief in the existence of many gods. It is estimated that 80% of the Japanese are Shinto, and in the country, there are more than 80,000 shrines of this religion. It is based on concepts such as purification and impurity and rites performed regularly to purify people from guilt, sin, bad luck, or disease.

The traditional Chinese religion is a religious tradition in which public authorities and ordinary citizens share several religious practices and beliefs. These range from the veneration of nature and ancestor’s forces to the exorcism is harmful.

Here are the main concepts of traditional Chinese religion and Taoism:

Tian: this word means day or sky in Chinese and constitutes the absolute principle of universal reality. The Tian is a transcendental and immanent reality.

Yin and yang: these are two concepts typical of Taoism that refer to the duality of all things present in the universe: two opposite and complementary forces. According to this principle, each thought, being, or object has a complement on which it depends to exist, which, in turn, exists within itself.

Hun and PO: are the names that Chinese philosophy has given to two different types of souls, thus forming a dualism according to which every human being has a spiritual and ethereal part ( hun ). At the same time as a corporeal soul, it remains in the deceased’s body ( PO ).

Bao Ying and ming Yun: the first concept can be translated as reciprocity and, according to it, all manifestations of being have a limited life span and a predetermined destination. For its part, the ming Yun refers to the fact that nothing we can see is a coincidence, but that everything is part of the rhythm of our destiny, which was already established before the appearance of a certain event.

Ling and xian ling: the idea of ling refers, on the one hand, to the sacred and, on the other, to supernatural power. The term Shen is used synonymously in the sense of spiritual. The xian ling refers to the manifestation of a god in a specific place or a temple.

Although with some variations, 30% of the Chinese population is followers of the traditional Chinese religion. In Taiwan, however, it has been incorporated into the set of beliefs typical of Taoism, which constitutes the religion of 33% of the population. It is also present in 3% of the Malay population.

For its part, Taoism is rather a philosophy of life that is fundamentally based on the Tao Te King attributed to the Chinese philosopher Lao Tse. The main teaching of Taoism refers to the concept of Tao, which is absolute. At the same time, a mutable unit that governs the cosmological and ontological principle of all things.

We have included Taoism in the same section as traditional Chinese religion because the truth is that the latter has inherited the basic principles and spiritual doctrine of Taoism and Buddhism and Confucianism, which makes them share several saints.